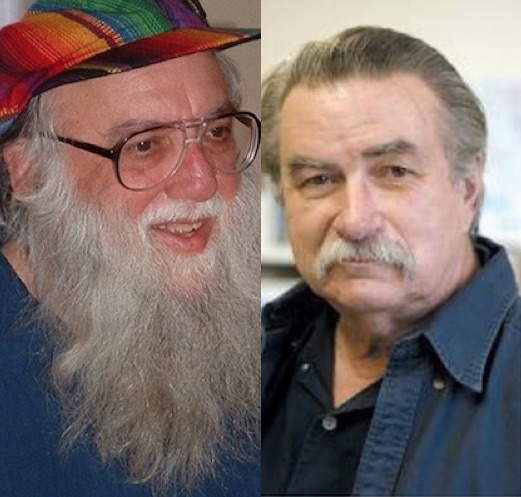 Thorne Dreyer's guests are Rabbi Arthur Waskow and Carl Davidson who discuss the life and legacy of the late Tom Hayden.

Tom Hayden, founding spirit of SDS, principal author of the Port Huron Statement, and arguably the most influential figure in the Sixties New Left, died Sunday, October 23, 2016, in Santa Monica, California, at the age of 76. After the movement years, Tom become a progressive leader in the California state legislature and, more recently, ran the Peace and Justice Resource Center. He was a longtime friend and colleague, a frequent contributor to and committed supporter of The Rag Blog and was our guest on Rag Radio five times.

Two men who knew Tom well and worked with him over the years -- and have written tributes to him on The Rag Blog -- share their memories of Tom and their perspectives on his place in history.

Rabbi Arthur Waskow, Ph.D., knew Tom Hayden dating back to the "Golden Age of SDS." The founder and director of The Shalom Center, Waskow is the author or editor of 24 books on U.S. public policy and on religious thought and practice.  He has also played a major role in public advocacy and nonviolent protest on behalf of peace, civil rights, full equality for women and gay people, freedom for Soviet Jewry, and healing for the wounded earth -- and has been one of the pioneers in the movement to renew the liturgical, intellectual, spiritual, and political life of the American Jewish community. Waskow was senior fellow at the Peace Research Institute and helped found the Institute for Policy Studies and was a contributing editor to Ramparts magazine. Rabbi Waskow has been arrested some 23 times in protest actions for peace, racial justice, and healing from the climate crisis.

Carl Davidson, a longtime activist and author, was a friend and associate of Tom Hayden's for many years dating back to the early days of SDS. A leader in the '60s New Left and peace movements, Carl is a former vice-president and national secretary of SDS and news editor at the leftist weekly, the Guardian. He is a member of the national boards of Committees of Correspondence for Democracy and Socialism and Solidarity Economy Network. He is active with Progressive Democrats of America, and is a member of Local 3657 of the United Steel Workers. Carl is a frequent contributor to The Rag Blog, and this is his sixth interview on Rag Radio.

Read tributes to Tom Hayden on The Rag Blog, including remembrances by Waskow and Davidson: http://www.theragblog.com/tag/tom-hayden-tribute/

Rag Radio (www.theragblog.com/rag-radio/) is produced in the studios of KOOP 91.7-FM, an all-volunteer, cooperatively-run community radio station in Austin, Texas, in association with The Rag Blog (TheRagBlog.com) and the New Journalism Project, a Texas 501(c)(3) nonprofit. The host and producer of Rag Radio, Thorne Dreyer, is a prominent Austin-based activist and writer who was a pioneer of the ’60s underground press movement. The show’s engineer and co-producer is Tracey Schulz and the staff photographer is Roger Baker. The syndicated show is broadcast (and streamed) live Fridays, 2-3 p.m. (Central) on KOOP (www.koop.org/listen-now), and is later rebroadcast and streamed on WFTE-FM in Mt. Cobb and Scranton, PA., on Houston Pacifica's KPFT HD-3 90.1, and by KKRN, 88.5-FM in Round Mountain, CA -- and as a featured podcast at Veterans Today (VeteransToday.com). Contact: ragradio@koop.org. Running time: 55:47.